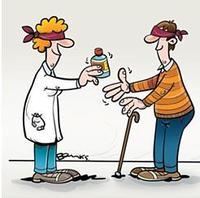 A double blind test is a scientific test in which neither test subjects nor administrators know who is in the control group and who is in the experimental group. The intent is to create an unbiased test environment, ensuring that the results of the testing are accurate and will stand up to analysis by other members of the scientific community. The concept of a double blind test is an excellent example of the scientific method, since it aims to be entirely objective and potentially repeatable.

One could simply offer the medication to a group of people and look at the results, but most drug testing involves the use of a placebo, or false drug. A placebo is a substance which appears to be an actual drug to a casual observer but has no physical effect on the body. The test subjects are carefully selected to ensure that they are at more or less the same level of health, and then divided into two groups. One group, the control group, receives a placebo while being told that it is the real substance under test, while the other group, the experimental group, receives the actual drug. Results between the two groups are compared to see if the substance under test has any measurable effects, useful or otherwise.

Typically, such a test is “blind,” meaning that test subjects do not know whether they are in the control group or the experimental group. This is intended to eliminate bias on the part of the test subjects, who may respond differently if they know which group they are in. In a double blind test, the researchers performing the testing also do not know who is in which group. This eliminates observer or experimenter bias, as experimenters may unwittingly bias

participants because they expect them to respond in a particular way. The double blind test is an industry standard for many pharmaceutical tests.

To administer a double blind test, a separate coordinator assigns the test subjects random numand divides them into two groups. Each subject is given a unique code which is known only to the coordinator. This coordinator also provides the drug to be administered. At the end of the trial, the researchers are given the code so that they can begin to interpret the results. bers

Using a double blind test method can ensure that test results are valid and more widely accepted by the general scientific community. It tends to cost more to administer a double blind test, because of additional paperwork and processing, but many scientists feel that this cost is well worth the benefits. In an even more elaborate situation, a triple blind test, the statistician examining the results is also kept in the dark about the identities of experimental and control group members.